Stop Identity Theft Before It Happens

Identity theft is on the rise.

This is Your Warning.

Cyber attacks are more ambitious than ever.

The odds of winning the lottery are 1 in 100 million.
The odds of being a victim of identity theft are 1 in 15.

Are you safe? Do you trust your chances?

The following statistics WILL scare you.

Get 100% peace of mind with Trusted Credit & Identity Theft Protection from Identity IQ. Stop identity theft BEFORE it happens.

Your Identity is At Risk

A lof ot people think that this type of criminal activity is somewhat rare, but your chances of being a victim are much higher than you think they are.

Have you heard of these brands and services?

Have you used them?

These are just a few of the major data breaches, exposing your personal information, from cyber criminals.

The Center for Strategic and International Studies (CSIS) estimates that the likely annual cost to the global economy from cyber crime is $445 billion a year.

Without the right protection, you are not safe.

As seen in the above map, identity theft happens everywhere in the United States. No matter if you live in the north, south, east, west, or live in an urban or rural area, identity theft strikes Americans nationwide.

The top 10 states with the most identity theft per capita are California, Texas, Florida, New York, Virginia, Washington, Pennsylvania, Illinois, Colorado and Georgia.

Shocking Statistics that Will Scare You

You could be next. Don’t let identity fraud ruin your credit, or the lives of you and your family.

How Thieves Steal Your Identity

There are dozens of ways criminals use to gain access to your personal data and steal your identity. Here are the most common.

Protect Yourself Before It's Too Late

There are things you can do to lower your risk of identity theft, like be mindful of where you use your credit card, never give out your password, and shred your mail before putting it in the trash.

However, many factors (like data breaches) are out of your control.

You deserve to know the personal information of you and your family is safe.

Guarantee your good name. The experts at Identity IQ provide a host of features that set it apart from other credit monitoring services.

Yes, with Identity IQ, even your entire family is protected. Children are especially vulnerable!
Identity theft of children often goes unnoticed until they reach adulthood. Over 1 million children in the U.S. were victims of identity theft in 2017, costing families $540 million in out-of-pocket expenses.
Act now before it’s too late! Get the protection you need and stop thieves dead in their tracks! 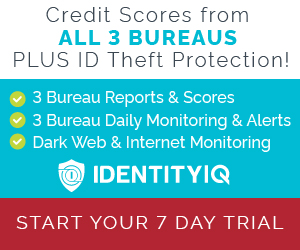 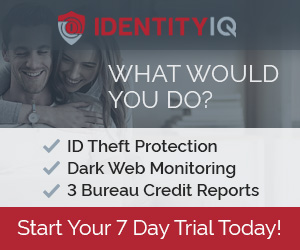